When I realized I'd be in Paris for over a week, it occurred to me it would be the first time I've stayed put in one place (outside of DC) for that long... ever, maybe. 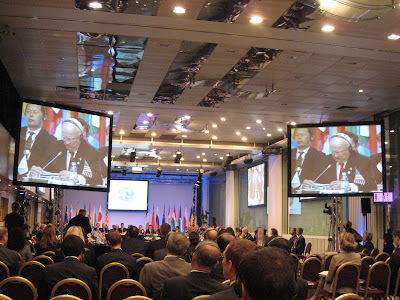 The Global Nuclear Energy Partnership (GNEP) Ministerial was held in Paris this year. 21 partner countries, 3 inter-government observers, 17 country observers, plus another 25 countries attending. Four new member countries signed the GNEP Statement of Principles and it was agreed upon that China would host the next Executive Committee Ministerial in 2009. 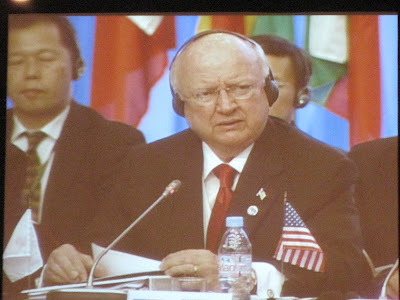 My boss was coming off of a few days for the IAEA in Vienna, so he was a little tired needless to say. He did great, though. It was especially neat for me to see him on the road and around so many of his international counterparts. 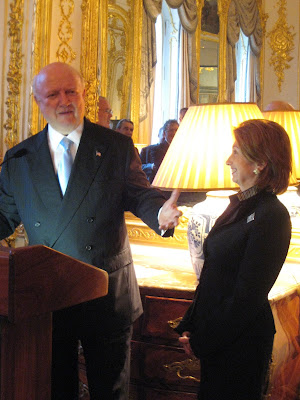 Ambassador and Mrs. Stapleton hosted a reception in honor of the Secretary in their home. There were about 75 of us or so. The grounds and rooms are just amazing - it was fun to poke around and look at the rooms and art and gardens. Ambassador Stapleton said a few welcoming words and my boss reciprocated with a very warm, sincere response in which he indicated he had been thinking more and more about how these really are the closing days of his government service and how these amazing opportunities such as staying with the Ambassador or joining his counterparts at these summits are coming to an end. I hadn't heard him express these thoughts very much before. It was touching.

We got the Boss and Mrs. on the plane and wheels up in one piece. Mrs. B told me she was really pleased with how it all went, thanked me for my efforts, and encouraged James and I to relax when they left! That meant quite a lot to me as you can imagine - there were some snafus at the beginning of their trip and James and I decided we really wanted to make everything perfect for our leg. I think it was as close as it could have been. We added some nice touches and they were not unnoticed :).

From the Embassy, hotel, and logistical end - this trip was not without its challenges. We had a brand new control officer who has not quite hit his rhythm yet, so we relied on a few other Embassy folks who were fantastic - Liz and Bridgitte specifically. The hotel was a total nightmare. I have never gotten so spun up to the point of making a scene in my life - but this hotel changed that! We spent hours at that front desk trying to get them to be organized and straighten out the errors. Good lord. Needless to say I am travelocity-ing them and will be one of the many to encourage people against staying there! We loved our drivers - especially Denis - and even Charles who thinks we are all like chickens. Oh and Ludovic of course. He's very sweet. 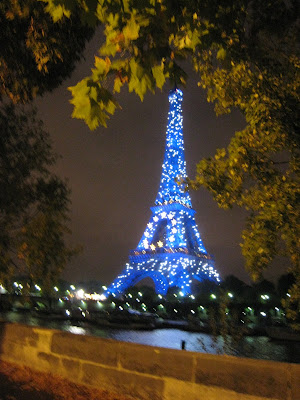 We played :). Paris! You're so beautiful! The eiffel tower is blue for 6 months in celebration of France's EU Presidency. At the top of every night hour, it sparkles for about 5-10 minutes.

I should pause and say something about being here with James. It has been a total hoot. We had fun the entire time. I would venture so far as to say we were having TOO much fun for some of the people around us who were stressing on work in the control room. We just had a ball - I don't know how else to emphasize it. We worked hard and played hard and were great partners. Laughing all the way. 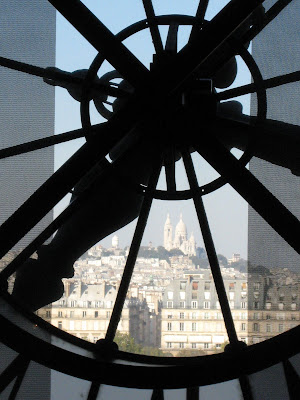 I did manage to get away for SOME cultural things aside from eating crepes or passing by the Eiffel or Notre Dame :)! I went to Musee D'Orsay (I went to the Louvre when I was here with Kayti in 2005). I of course got a trusty audio guide and spent an afternoon looking at Renoir, Monet, Van Gogh. We all know that art is always so much more striking in person. But... like... it really is! Maybe this is a silly point to focus on. I'm just trying to say it was beautiful. I loved it. 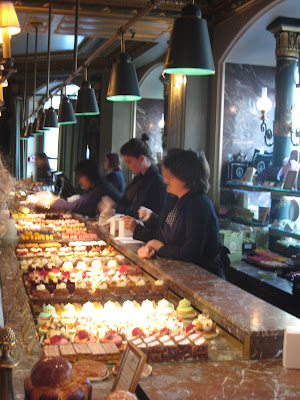 Photo taken yesterday at LaDuree on the Champ Elysee - famous for its macaroons. Unfortunately we're having major camera difficulties so we don't have photos to show for our walk up to Arc de Triomphe or our gorgeous but cold afternoon strolling around the Sacre Coeur in Montmatre. Just lovely. 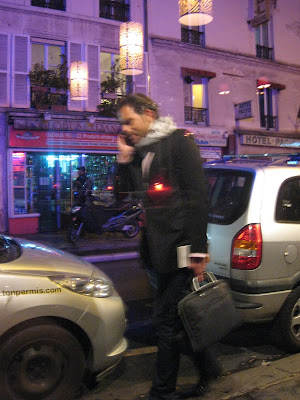 My favorite part of all of this has been seeing Yann, Vincent, Melina, and new friend Jeremy. Also I happened to bump into my old DC friend Eric on the street corner - yes, totally random. Yann - who James thought was a model for L'Oreal (he's actually a marketing/arts director)- and the picture above would suggest why that mistake can be made! Anyway I just love Yann. David knows him from when Yann studied at UT. He's wonderful. Sweet, genuine, relaxed... and so hospitable. I'm curled up on his couch right now :). Vincent - my refined Vincent is the best description I've settled on. He's smart and serious and crazy and complicated. And tall. Vincent is very tall haha. Melina - UGH Melina is the sweetest, smiliest girl in the world. She's gorgeous and has no idea. She invited James, David, and I to tea and macaroons at her apartment and was so gracious and excited. She's also ridiculously smart. Jeremy is my new friend through them who had BETTER get his act together to make it to Barcelona for new years! He does what he wants to do - comes and goes as he pleases and makes many jokes but no apologies about his behavior. I love these friends, do you know?

For Heaven only knows why one loves it so, how one sees it so, making it up, building it round one tumbling it, creating it every moment afresh; but the veriest frumps... can't be dealt with, she felt positive, by Acts of Parliament for that very reason: they love life. In the triumph and the jingle... was what she loved; life; London; this moment of June.

Pardon my paraphrasing. And you're right, I'm not in London. But - oh - doesn't this just capture it? Heaven only knows why one loves it so! To love life ... this moment. The toothy crepe guy on the corner of Rue de Grenelle who reminds me he is "still here." The impatient rider who raises the metro door latch before the train stops moving. The sidewalk cafe perch that feels so removed from the whizzing around it. Chipped paint window shades and cast iron balconies The excitement of not knowing what the next corner's turn will look like. The knowing it is time for a change.
Posted by Carrie at Saturday, October 04, 2008 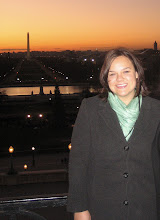